Audio Mixing and Mastering. What Is The Difference?

What is the Difference Between Mixing and Mastering?

This question is often asked not only by people who are new to the music production process but seasoned musicians with no ambitions for the technical side of the recording process. However, 99% of recorded music pass through mixing and mastering stages before being released for distribution (physical or digital), streaming and radio broadcast. Before we get into details, let’s define the main difference between these processes.

Audio mixing is the process of combining recorded tracks into a final mix. It usually involves the processing of individual audio tracks, balancing them against each other, adding some space and effects, and creating a stereo or multichannel surround image.

Mastering of the track is the process of performing all necessary adjustments to a final mix, so it is ready for the release. Mastering engineer works on a stereo or multichannel audio to adjust its’ overall tone and loudness, according to technical requirements of the release, as well as to shape the overall character and vibe. It may also involve some editing, like radio version, for example.

Stem mastering is a separate topic, which we will cover at the end of this article.

To avoid any further confusion, let’s dive into some detail about Mixing and Mastering.

Mixing is the first part of the post-recording process. Some may argue with me, that audio post-production in music starts with the editing of the recorded material, but in reality, we usually start mixing while recording without even thinking of it. To get a good performance from the musicians or the band, we need to have a rough balance of the instruments in their headphones during recording. This balance determines the sound concept of the track on the first stage. Then we may decide to edit the recorded audio or not, based on our style and concept. During the mixing we understand, if we need any additional editing of certain parts or not.

The main purpose of mixing is to make separate audio tracks to form a good resulting sound picture when all of them are playing together. It is not only balancing the instruments using their volume and position in stereo but shaping the tone and the dynamics of each individual track, placing them into an acoustic space and adding some special effects to achieve the desired tone or make them sound following the concept of the track.

Experienced mixing engineer always starts with the concept of the track. The best mix is the mix which suits the song. It is silly to implement the same mixing techniques to acoustic rock and heavy metal, although the studio uses more or less the same tools, the attitude matters.

There are, however, common practices, shared by most mixing engineers when doing their job. They have to resolve tonal clashes between instruments, even out some frequency resonances, darken or brighten certain tracks to get the right sonic place in the final mixdown, eliminate phase issues, and filter the excessive low or high frequencies.

Mix engineers also take some creative decisions from time to time. They may emphasize the chorus to sound brighter, bigger, louder (you name it), to achieve the desired impact. Adding some unusual delays or processing the reverb with distortion or flanger may also fit. Good mixers combine the technical and creative approach to music to make a great record.

There is a lot of misunderstanding about the mastering process. Some may think of it as magic, that saves bad mixes, some think that is is a strictly technical process to match the requirements of the distribution media, some ask, if it is possible to cut the vocals completely from the final mix, and the list goes on. However, mastering is a crucial final stage of the music production process, including correction and shaping the overall tone of the record together with technical characteristics. In a few words, we can say that mastering is to make your song sound good everywhere.

Mastering engineer works with the stereo mix of a single song or an EP or the whole album. They may manipulate fewer things than mixing engineers, but they usually see the general concept of the record without tearing it into pieces. If the mix is good, mastering should just “add some gloss” to it without modifying. The equalizer movements are subtle and dynamic processing serves both technical and sonic purpose, but it normally helps to “glue” the instruments together even more.

Making the record loud enough, punchy, bright and spacious, having only a stereo mix without ruining its original balance makes one a good mastering engineer.

This process is more demanding to the quality of the equipment, studio monitors and acoustic treatment. The flat frequency response of the sound system and the room allows an engineer to make the right decisions, based on the true sound picture.

Technical parameters are chosen according to means of distribution. Loudness and dynamics of the master record matters as well as the sample rate, bit depth and peak levels. We will not go deeper and discuss analogue media, such as vinyl; however, if your mix is too loud and bass-heavy in stereo, it may cause the stylus to jump out of the groove. As you can see, some technical requirements are dictated by the nature of media and simple physics.

And yes, even the mix you did in your bedroom will benefit massively after a professional mastering.

The Difference in Mixing and Mastering Workflow

Once you finished recording, you have all your tracks separately in your DAW, and you send them to a mixing engineer. At this stage individual instruments are processed and then summed together, using digital algorithms “In the box” or analogue mixing desk.

After all necessary labelling and patching is done, every engineer has his own workflow, what to start with. Some may do drums first, or begin with the voice or listen to raw mix for a few times to form the general concept. It is a time-consuming process and may vary from a few hours to a full week when there are a lot of musical changes and over a hundred instrument parts involved.

After the mix is “bounced” or “printed” and approved by the client, it is ready to be sent to the mastering facility.

Mastering workflow differs from the mix, and even different mastering sessions may vary. If it is an EP or an album, mastering engineer starts with placing tracks in order and listening to them as a whole to decide on balance and transitions between them. Then, depending on style and distribution media, mastering chain and technical requirements have to be set. Some may add analogue grit and flavour to rock mixes, or keep pop and classical recordings as clean as possible without even leaving the digital environment to avoid any additional harmonics. Using broad equalizer curves, they shape the tone and cut some resonant or harsh frequencies with quite a surgical approach.

What is Stem Mastering? Or Stem Mixing?

“Stem Mastering“. You can see this more and more often in recent years due to an increased number of productions, done at home. Basically, when you send your track for mastering, you may have it returned to you with the suggestion to bring the kick drum a dB lower and brighten the vocals a bit. This happens because many producers work outside the studio and do not have access to the acoustically treated room and a professional mixing engineer. And this is how some mastering engineers decided to request stems from the beginning, which extends their role and the level of control a little bit further down to some mixing. For example, the most typical set of stems consists of drums, bass, synths, guitars, and vocals. This allows the mastering engineer to shape and rebalance some elements within the mix before final processing. It is more of a compromise, though. The name is confusing simply because it was introduced by mastering engineers, not the mixers.

Now You Know the Difference Between Mixing and Mastering!

After reading this article, you should have fewer questions on the mixing and mastering process, and you will be definitely more confident on what service you need. Many musicians think of it as a sort of witchcraft, that happens after they leave the studio, but we want you to know about all the stages of music production to decide, which one you need. If you still have questions, please contact us. We are offering mixing and mastering services online, and we will guide you through all stages. 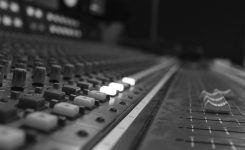 The Real Art of Recording, Mixing, and Master...

No comments so far.